Review of A Home & a Hunger: Songs of Kingdom Hope

Good theology has a way of putting us in the redemptive story. Our theology reveals our hearts, identifies us with the characters in ways that make us think, “I am like him,” and opens our hearts to God’s truth as it moves toward our need. Good theology doesn’t stop there—it gives us a song no matter where we find ourselves in life’s journey. In sorrow, in rejoicing, and in mourning, God gives us a song to sing in the pages of Scripture, if our theology will allow us to sing it. 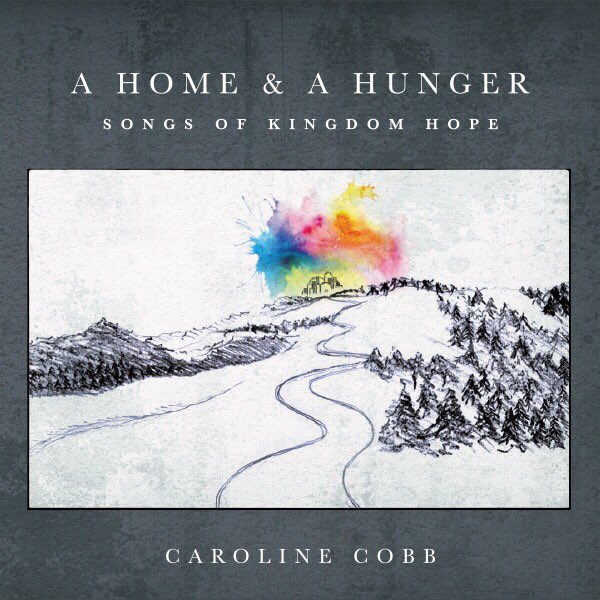 In A Home & a Hunger: Songs of Kingdom Hope, singer/songwriter Caroline Cobb invites listeners to sing the story of God’s kingdom. For the past six years, Cobb has been writing songs for various books of the Bible, which led both to A Home and a Hunger as well as her previous release, The Blood + the Breath: Songs That Tell the Story of Redemption. On this new record, Cobb covers particular passages and thematic elements through the lens of our hope in God’s coming kingdom. By noting the shifts in perspectives, sub-themes, and calls, listeners will observe Cobb tells a composite story of the biblical kingdom that has both already arrived yet awaits the fullness to be revealed. Cobb has emerged as a unique and needed voice as she attempts to make biblical theology accessible for old and young, new believers and longtime Christians, for those who know their need and for those who think they’re doing OK.

Cobb is both a storyteller and theologian, which listeners will notice in the changing viewpoints of individual songs. Each song tells a kingdom story from the perspective of a different biblical character. For example, the narrator of “Eve’s Lament” is Eve herself dealing with the curse of her disobedience. Cobb imagines Eve after the fall as she reminisces about life in the Garden of Eden, wrestles with her choice, and considers the lies of the serpent that played upon her desires. Then in “He Has Made a Way,” the Israelites sing after God’s magnificent rescue from Pharaoh’s forces at the Red Sea, in “All Is Vanity,” Solomon considers the meaning of life and eternity, and in “Only the Sick Need a Physician,” the Pharisees express their indignation toward Jesus and reject his call to the sinners and outcasts. By changing viewpoints in nearly every song, listeners are taken on a Scripture-guided tour through perspectives of God’s kingdom in order to revel in the King who has come and will come again.

By allowing various characters to serve as narrators in most songs, Cobb distinguishes her writing from similar artists by reducing her presence as narrator/storyteller. Each song tells a story, but few present her as the main character in the song. Instead, she sees herself as participating with listeners, uttering the words, “Me too,” throughout the record. A notable exception is “The Two Lost Sons,” a song based on the parable of the prodigal son in Luke 15. In this song, Cobb takes on the role of narrator but identifies herself in the role of each son: the younger who “chase(d) my pleasure” and the older who “acted like an employee / Not a son, not a daughter.” This rare moment in which Cobb narrates gives emotional weight to the song’s confession, and encourages listeners to enter into confession as well.

The Way to the Kingdom

Layered beneath the record’s theme of our great kingdom hope are sub-themes that explain what the kingdom is, the way to the kingdom, and who the kingdom is for. Songs such as “Fullness of Joy,” “Emmanuel (Every Promise Yes in Him)”, “We Draw Near,” and “Behold, Behold” reveal that the kingdom of God is apparent in the presence of God among his people.

The song “He Has Made a Way” begins tracing another theme: God makes a way to the kingdom through Jesus. “Fullness of Joy” picks up on this as well, as Jesus is the “path of life,” and “Pave Every Road” and “There Is a Mountain” envision the route of repentance that leads to God’s eternal kingdom.

But who can journey along this way? As seen in nearly every song on the record, the kingdom of God is for those who know their need. As it appears in “There Is a Mountain,” “need is all you need.” However, this theme is also a call to come, directed toward “hearts broken” and “hungry souls” (“There Is a Mountain”), the people of Israel (“He Has Made a Way”), “scarlet letters… outcasts and debtors… broken and fatal” (“Only the Sick Need a Physician”), the older and younger prodigals (“The Two Lost Sons”), and “thirsty…, hungry…, weary” (“Behold, Behold”). This emphasis echoes the Gospel of Luke in its particular call of salvation for the unlikeliest people: the weak, broken, marginalized, and sinful.

A Call to Journey

In a sense, A Home & a Hunger follows the style of the Psalms of Ascent (Psalms 120-134). These Psalms were recited and sung by the people of Israel on their annual trip to the Temple in Jerusalem, and they reminded the people of the God who rescues, what they were rescued from, and the continual journey of following God. Similarly, Cobb has written songs for the journey of the Christian life in order to lift the hearts of pilgrims seeking God’s promised land.

The record begins and ends with similar calls to listeners: come and behold. Cobb beckons listeners to become participants in this grand story and to find encouragement for the journey within these songs. The twin calls to come and behold direct hearts to enter into the trek to the kingdom while reveling in the greatness of God and Jesus’ work on the cross. Cobb wants listeners to be astounded at the accessibility of the kingdom and at the God who reigns, and encourages listeners to echo the last line of the record: “Oh come, Lord Jesus, come” (“Behold, Behold”). She looks forward with hope to the day our journey will end because we will be with God forever.

In A Home & a Hunger, Cobb beckons us into the biblical narrative so we may find ourselves in the pages of Scripture. She invites us to acknowledge our need for a King and our inability to heal our innate soul sickness, and then to “boldly come / (to) Jesus, our righteousness” (“We Draw Near). In a culture (sometimes even within the church) in which we can easily fool ourselves into thinking self-improvement and sanctification will reserve our place in God’s kingdom, Cobb appeals to us to identify ourselves with the “scarlet letters / You outcasts and debtors” in order to find healing in the presence of the Great Physician (“Only the Sick Need a Physician”). Only through this kind of humility can we embark on such a great kingdom journey.

A Home & a Hunger is a fantastic resource for the church both as an encouragement and an exhortation. On this record, Cobb has faithfully retold the kingdom story in a creative way, and I pray many others will be inspired by God’s word and the mission of the church to continue creatively retelling the old, old story. I recommend this record as one heartened by it, and pray it strengthens you as well.

Editor’s Note: A Home & a Hunger releases on Friday, September 7. Sample and preorder on iTunes!

Jennifer Grisham (@jennifergrisham) serves as adminstrator of Doxology & Theology and director of administration at Providence Church in Frisco, TX. She's a graduate of Baylor University and a student at The Southern Baptist Theological Seminary. Find her online at jkgrisham.com.